You are here: Home / Backyard Chickens / The Coup de Coop

Let me just say up front, flock integration is not for the light hearted.  Anyone watch the Bad Girls Club on the Oxygen channel?  Yeah, completely trashy, bad-girl drama (makes treadmill time at the gym fly by!).   Yup, that’s what we have going on at the Second Street Chicken Ranch — just substitute “chixs” for girls.

The two Blondie’s arrived yesterday afternoon and my plan was to slip them into the coop after dark, once my girls had retired for the evening.  Well, it had been a long day and I was tired, so after a little meet and greet between cage wires, I decided to do a more formal introduction.

Helen decided to tag team with Henny, and in a dust up, Big Blondie got tossed off the roost. She too lost a clump of feathers immediately.  The rest of the flock was in a complete panic trying to stay clear of the mayhem. Oy!

I tossed in some lettuce and thankfully things settled down for a few moments. It didn’t last and at one point the new girls were cornered; Helen on one side and Henny on the other.  It was brutal.  I did my best not to intervene but I finally grabbed the new girls an pitched them into the coop.  Much to my dismay,  they jumped back down and into the “ring.”  I really don’t see how anyone could witness a cockfight; hen pecking is brutal enough. 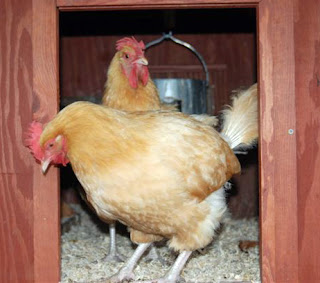 Well after a few more rounds of getting the s%#@ kicked out of her, the little Orpington got smart and retreated to the coop.  “What the hell,” is what I could imagine big O saying…move over sister, I’m right behind you!  They stood in the doorway together, blocking the entrance.  As I went in the house, I turned to see Henny midway up the ladder.  This should be good…but the Blondes held their ground and Henny backed off.

This morning I half expected to find two pecked to death Orpingtons in the coop.  What I did find were two blondes still in the doorway.  My girls had been shut out and shut down. Shut up!

Tonight the Blondes (who will have names soon) were still holding the fort – a coup of the coop, if you will.  Hey, they got it made – the food is in the coop along with water and cozy nest boxes. Maybe blondes aren’t so dumb!  And, even under such unwelcoming circumstances, they left me a beautiful cream colored egg.

My girls, on the other hand, are grumpy and probably hungry (I set out another waterer).  They need to get it together.
It’s dark now and my plan was to go out and put one or two of my “good” girls on the roost in the coop. But to my surprise,  Henny was already on the roost inside the coop, along with Flame.  I put Harriett on the roost inside and left Helen and Penny on the outside roost.  The Orpingtons were still roosted in the doorway.  This might work out after all…